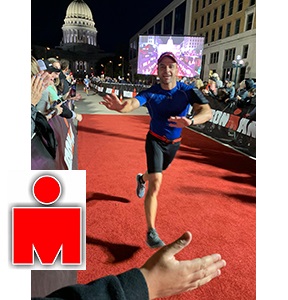 No, that’s not a typo—that headline really should read “IronMand” and here’s why:

TDS had a special connection to the recent Wisconsin Ironman race—our very own director of Network Configuration and Tech Support, Jeff Mand, competed in the famous triathlon for the first time. In fact, Jeff had never run 26.2 miles, had never swum 2.4 miles, and had never biked 112 miles. So what motivated him to do ALL of these endeavors in one day?

It was his friends. “I watched a couple of people I knew do an Ironman, and I thought, ‘wow, this is pretty cool,'” he said.

Jeff then began training for a Half Ironman (1.2-mile swim, 56-mile bike, and 13.1-mile run). He finished his first Half Ironman this past June. “Afterwards, I felt pretty good and I just said, ‘Let’s just do this (Ironman) and make this happen.'”

Jeff immediately signed up for Ironman Wisconsin and spent the summer training. Saturdays became his bike day when he would spend two to four hours biking and then Sunday was Jeff’s run day.

Finally, it was Ironman Wisconsin day, and at 6:50 a.m. on Sunday, Sept. 7, Jeff joined about 2,500 athletes in the waters of Lake Monona. The swimming is the first event in an Ironman, then the biking and finally the marathon run. That evening just before 9 p.m., he heard Mike Reilly state just before he crossed the finish line: “Jeff Mand of Middleton, Wisconsin—You’re an Ironman.”

A few days after finishing the event, he said it’s pretty surreal to think back about the day. “It was a fun day. I actually liked it more than I thought,” he said.

Not only is it crowded at the start of any race, Jeff said, unfortunately, it was a wavy day on Lake Monona. Jeff said he “got whacked in the head” a few times and kicked too—something you never experience in practice.

“I tried to remain calm and keep swimming,” he said.

While Jeff swam a little in nearby Lake Mendota in late spring, the seaweed grew during the summer, so it became too difficult to swim. So he was forced to move to a swimming pool. But a pool has those nice lines at the bottom to keep you swimming straight and those walls where you can turn and push off.

The waves made it challenging for Jeff to stay on course, so he said he had to continually look up to “stay on line.” 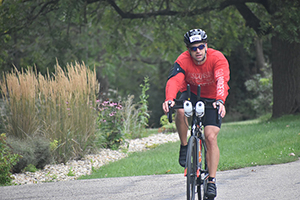 Jeff had practiced on the Verona, Wis. bike loop several times. “I knew the course, but had never done two laps.”

The bike portion is a good opportunity to talk with others on the course and wave to people you know. There was a competitor that passed Jeff, and then Jeff would pass him. “We must have passed each other about six times. It was pretty funny after a while.” He said the camaraderie is a lot of fun. “You meet people from all across the country.”

However, it was mile 85 when the bike portion became tough and the blisters started to form. “I thought, I don’t think I’m ever going to ride this bike again!”

Jeff credits the great crowds throughout the bike portion for getting him through this part of the race. “Ironman Wisconsin is known for its great fans,” he said. “It’s super, super motivating.”

As Jeff started the marathon and was running up to Madison’s state capitol, he heard a huge roar from the crowd. The winner was just crossing the finish line. Even though he knew he had 26 miles to go, it was “pretty cool” to be on the course at the same time as the winner. Emilio Aguayo Munoz won Ironman Wisconsin in 8:34:20.

The most challenging part of the marathon came early. He said mile four is when his legs started getting tired. But, once again, it was the crowds and the athletes on the course that kept him going.

When asked what the best part of the race was, Jeff said it was when he turned on State Street and saw the crowds. Even though the run is uphill, Jeff kept high-fiving everyone he could. 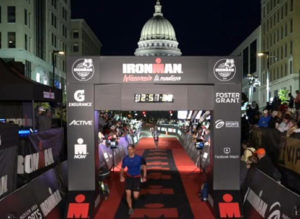 “The last 2½ minutes of the race was probably the coolest thing I’ve ever done,” he said. His family joined him near the finish and it was “really neat.” When he crossed the finish line and heard the announcer state he was an Ironman, he said, “I don’t even think my legs hurt anymore.” Jeff finished the run in 4:44:58.

When asked if he would ever do another Ironman? “Maybe. I’d like to see if I could improve my time.” Spoken like a true Ironman.

The back-to-school talk all kids need
TDS open for business in Idaho!