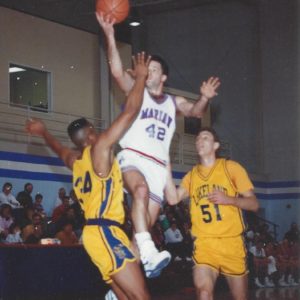 One of TDS’ own was recently inducted to the Marian University athletics Hall of Fame. Daryl Loether, associate manager of Accounting, played men’s basketball and set records at Marian from 1990 to 1994.

“I was honored and humbled when I heard about my induction into the Hall of Fame,” said Daryl. “Being a student athlete taught me how to schedule and plan ahead. Hard work really does pay off.”

Daryl was an all-around player offensively and defensively. He holds the university record of 704 total field goals and comes in second in all-time points scored with 1,515. He has the third most number of steals and rebounds, at 175 and 656 respectively. He comes in at 10th in blocks for the university with 53.

In his senior season with the university from 1993-94, Daryl set the program record with 267 field goals in a season and put up the third most points in a season with 566. These accomplishments won Daryl the titles of Lake Michigan Conference Player of the Year, National Association of Intercollegiate Athletics District Player of the Year, NAIA Third Team All-American, and NAIA Scholar Athlete.

When asked about his favorite memory from Marian basketball, Daryl described how Marian played UW-Platteville three times over the course of Daryl’s collegiate basketball career and got crushed each time. Although losing isn’t a fond memory, he was able to meet UW-Platteville’s coach at the time, Bo Ryan.

“The last time we played them, Coach Ryan shook my hand after the game and told me I was a pretty good player. Looking back now, that was pretty cool,” said Daryl.

Although he hasn’t played basketball for a few years now, playing in a basketball game at age 50 is on Daryl’s bucket list.

Congratulations to Daryl on this outstanding honor!

Guest Blogger: Mary Mulcahy
Mary is PR Intern at TDS Telecom and a Journalism student at UW-Madison. She recently returned from studying abroad in Galway, Ireland. In her free time she enjoys traveling, running, cooking, and reading.

Cheap Tunes Tuesday: Mumford
The most popular Christmas movie in your state