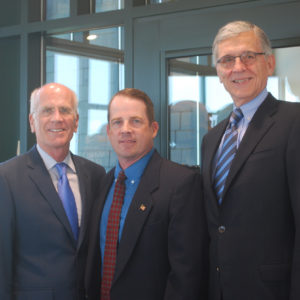 Scott Brooks, a state government affairs manager for Vt., N.H., Maine and N.Y. represented TDS last week at a roundtable discussion with Federal Communications Commission (FCC) Chairman Tom Wheeler. The event, organized by Congressman Peter Welch, Vermont’s only member of the U.S. House of Representatives, was held at Champlain College with members of the telecommunication industry in Vt.

The forum focused primarily on the challenges associated with deploying broadband in rural areas—a keynote concern to FCC Chairman Wheeler. With that goal in mind, the FCC has been working on modernizing the federal universal service fund, taking it from a program centered on ensuring phone service towards one that provides access to higher speed internet service. The FCC voted to move in this direction earlier this year and now the agency is completing the details, including funding amounts and program requirements.

As the FCC works on finalizing the parameters of the program, TDS is preparing to pursue funding—anticipated to be available earlier next year. The new program could make a profound difference in many of the high-cost communities TDS serves that are hungry for faster and more reliable bandwidth.

During the conversation, Chairman Wheeler talked about how the industry has changed, even during his short tenure as chairman. Wheeler remarked to the industry group, “I can’t even imagine the changes the Carlson family has seen in their lifetime as owners of TDS.” Brooks reports Chairman Wheeler spoke very highly of TDS and said he valued the company’s regular policy input in D.C. and respected the leadership team greatly.

Beyond broadband issues, the chairman fielded other questions from the industry group. Brooks took the opportunity to highlight items such as the Open Internet orders new privacy requirements, retransmission consent costs associated with acquiring broadcast channels for video offerings, and proposed set-top box obligations as burdens customers cannot continue to absorb. Wheeler said he understands, values and supports independent operators, and stated that smaller operators like TDS should not be regulated the same as larger companies.

Representatives from TDS meet with others at Champlain College for a communications issues forum.

With big regulatory decisions expected between now and the November elections, the forum with Chairman Wheeler and Congressman Welch couldn’t have come at a better time as TDS advocates on these important regulatory matters before the FCC in Washington, D.C.