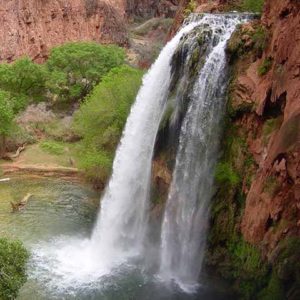 Take a walk on TDS’ wild side

You might think you have to take an exotic vacation to enjoy some amazing sights. Actually, you don’t have to go any further than TDS serving areas.

In honor of summer officially starting soon check out these amazing TDS places located on world-famous and unique walking trails and paths:

You can take a walk in the woods, just like renowned author Bill Bryson, by picking up the Appalachian Trail. The 2,200 mile-long trail begins in Maine and extends all the way to Georgia. It’s described as the longest hiking-only trail in the world. Kingfield, Maine, a TDS serving area, is approved and designated as an Appalachian Trail Community, known to act as a good friend and neighbor to the trail and its visitors.

If you happen to hike in the Virginia segment of the scenic trail, take a break and wander over to nearby Paint Bank, Virginia. This TDS community has many historic sights and interesting things to see (including a very interesting cow sculpture!).

Here’s a TDS community where you have to hike to find it. Located within the Grand Canyon National Park, Supai, Arizona can only be reached by hiking the eight miles into the community, riding a pack animal, or via helicopter. Supai has been referred to as one of the most remote communities in the United States. There are no automobiles in the community and it is the only place in the United States where mules still carry out the mail.

Winding 1,200 miles through Wisconsin, the Ice Age Trail passes through 30 of Wisconsin’s 72 counties and seven TDS service areas. The trail traces the location of the state’s terminal moraine—rocks and earth carried by glaciers and left when the last ice age ended.

Consider picking up first part of the trail near Medford. Located near many scenic forests and lakes, this community also happens to be an industrial and manufacturing hot spot—a perfect fit for the TDS network build bringing fiber-to-the-home to more than 1,600 addresses starting this fall.

As you head south on the trail, you can’t miss the cities Cross Plains, Middleton, and Verona—all TDS markets on the trail in South Central Wisconsin. If you keep walking for another 25 miles or so you’ll also get to visit Albany. This small TDS community was originally settled by the Winnebago tribe, who like modern day residents and visitors, enjoyed the area’s rolling green hills and the Sugar River.

Near the north eastern tip of the trail, you’ll also walk through St. Nazianz and Valders. St. Nazianz is a village of less than 800 people, but it’s considered in some circles to be among the most haunted places in the state. Valders, named for the Valdres mountainous region of Norway, is known for its rocky hills and limestone quarry which produces a rock, gravel, and a very hard and weather-resistant type of marble.

Made famous by the book and movie “Wild,” the Pacific Crest National Scenic Trail (PCT) spans 2,650 miles from Mexico to Canada. The hiking and equestrian trail goes through some of the most gorgeous landscapes in California, Oregon and Washington. Hikers will cross deserts in Southern California, the rugged Sierra Nevada mountain range, and the snow-drenched peaks of the North Cascades.

In Oregon, the trail winds through the Deschutes National Forest and has resupply points in the communities of Sisters and Bend, two communities TDS serves through BendBroadband. PCT trail hikers will find a landscape shaped by volcanoes, with the highest trail point in Oregon at 7,560 feet and the lowest point is at the Bridge of the Gods at an elevation of 180 feet.

In the TDS community of Cortez, Colorado, there are many hiking trails including the Old Spanish National Historic Trail (about 700 miles from Northern New Mexico to Los Angeles, California), the San Juan Skyway National Scenic Byway (a 233-mile loop trail in Colorado), and the Trail of the Ancients (about 480 miles which highlights the archaeological and cultural history of southwestern Native Americans in the states of Colorado and Utah). Looking for a variety of day hikes near Cortez? Check out the beautiful sites in nearby Mesa Verde National Park.

Now that you know about these locations, where do you like to hike?