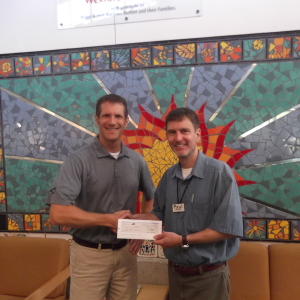 Employees from TDS Telecom, Baja Broadband, and OneNeck IT Solutions (two companies also in the TDS family) continue to make strong community connections through their good works! From helping out local food pantries to getting soaked for a good cause, employees across the enterprise are doing what they can to help others.

The LCEC’s food pantry has been running for more than 25 years. The pantry provides an assortment of nutritionally balanced, non-perishable food items to individuals and families up to 12 times a year.

E-waste recycling event in Colorado
TV’s, computers, printers, and much more were collected by volunteers in Hotchkiss, Colorado during a recent E-waste recycling event. TDS Telecom along with several other businesses and organizations helped sponsor the event. According to the area’s local paper, The North Fork Merchant Herald, between 10,000 and 12,000 pounds of e-waste was collected.

CAPPED says thanks to Baja
Don’t believe your actions make a difference? Here’s proof that what you do matters. According to Baja Broadband’s coordinator of Marketing and Public Relations, Phyllis Duncan, this thank you note comes from the director at an organization known as CAPPED (Cancer, Awareness, Prevalence, Prevention, Early Detection). Baja runs Public Service Announcements for CAPPED on TV. The Director sent them this note to say thank you. He says the Public Service Announcements have gotten “at least 30 cancer patients or their family members” to walk through CAPPED’s doors looking for help!

Barclay Pollak is an award winning journalist and proud to be a member of the Corporate Communications team at TDS Telecommunications Corp. (TDS®) in Madison, Wis. Barclay joined the team in April of 2013. Before that Barclay worked as an Anchor/ Reporter for the NBC affiliate in Madison. While at NBC-15 Barclay was recognized by several organizations for his contributions to the television news industry. They include the Wisconsin Broadcasters Association, the Radio Television Digital News Association (Edward R. Murrow Regional Award) and the Chicago/Midwest National Academy of Television Arts and Sciences (2012 Emmy Nominee). When he’s not working Barclay enjoys cheering for all the sports teams in Wisconsin. Barclay’s a University of Wisconsin-Madison alumnus and a huge fan of Badger athletics. Barclay is fascinated by the ever changing world of technology and spends a fair amount of his free time reading about the latest and greatest developments online. When Barclay’s not learning about technology he’s scouring the Internet in search of freeware. Barclay has an 8-year-old daughter and lives with his girlfriend of almost five years on Madison’s southwest side. G+.
View all posts by Barclay Pollak →