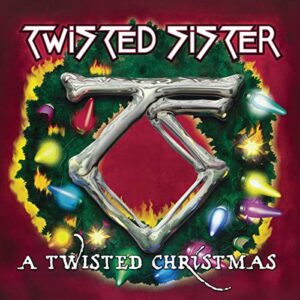 In my final holiday blog of the year (and final entry of 2020), I wanted to find a holiday album that was a little outside the box. Something a bit unusual—maybe a little twisted. Today’s featured act certainly checks all those boxes, and the fact they have a holiday album is simply outstanding.

A glitter band called Silver Star was rocking New Jersey in the early ‘70s. Manhattan resident John Segall auditioned and was asked to join, and soon after they began calling themselves Twisted Sister. With the name change came some stylistic updates that not everyone in the band agreed with. Because of that, they saw some turnover and needed to fill the void. After doing so, the band had a standing gig six nights a week at the same club in Jersey before finally moving over to the scene in NYC.

Since their shows were so intricate, complete with makeup and costume changes—they were exhausting nights and performing everyday began to take its toll. After a brief breakup and decision to retool once more, the guys were introduced to Dee Snider who had been in a couple successful glam rock bands in the past. His experience would influence Twisted Sister’s glam look mixed with metal, which is the group’s signature to this day.

It took until the mid-‘80s before Twisted Sister would see any significant mainstream popularity. But with hit singles like “We’re Not Gonna Take It” and “I Wanna Rock”, the band cemented their legacy as one of the most influential hard rock acts in history. VH1 has them firmly in their top 100 of all time. And while the act declined in the late ‘80s, Dee Snider has been a huge advocate for various causes and has kept the group semi in the limelight since. To that end, their seventh and final album A Twisted Christmas hit shelved in October of 2006.

It’s nothing but an album of absolute classic Christmas songs played in a heavy metal style—with a few lyrical changes along the way. They even rearranged a few of the standards to fit some of their more well-known hits from decades prior. The opening track starts as what would appear to be Twisted Sister becoming a more traditional act, singing a holiday ballad, when someone interrupts, proclaiming “that’s not Twisted Sister!”—and from there, you get a much more in-your-face, metal holiday record.

The group produced and released this album on their own, and it seems like they had a lot of fun doing it. Two music videos were made to compliment it, something they group had always prided themselves on doing—not just for the publicity, but to genuinely be entertaining. Critics seemed skeptical at first but were stunned by how much they loved the harder interpretations of the traditional carols. They remarked how absolutely original this album was, and something you hadn’t heard before and may never hear again. I certainly wouldn’t argue with that summary. When this came across my radar today, I couldn’t help but chuckle thinking it would be somewhat of a joke. Then I flipped on a few tracks and found myself singing along and nodding to the guitar riffs. They even brought in female metal icon Lita Ford to collaborate—they really wanted this to be something memorable and celebrated.

After drummer AJ Pero passed away in his sleep in 2015, Twisted Sister decided to have one final farewell tour and call it a career. They sold millions of albums, influenced dozens of modern bands and gave a voice to a new style of hard rock. Oh, and made a Christmas album that any rock fan is sure to enjoy. And with that, I sincerely wish you and your family a safe, fun and enjoyable holiday season. See you in 2021 music fans!