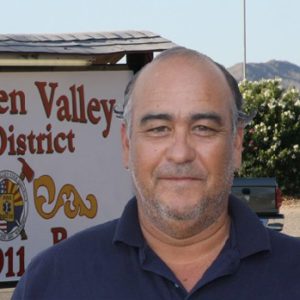 All in day’s work for this good samaritan

“I saw someone that needed help, so I helped them.”

That’s how TDS Field Service Technician Gabriel (Gabe) Palma described the situation when asked how he helped a man and his wife stranded on the side of the road with their vehicle.

Gabe described the day as a typical afternoon in September. He was driving his TDS truck down Interstate 8 in southern Arizona when he saw a man frantically waving his hands. Gabe said, he could “tell he was in distress” and needed help.

Gabe immediately pulled over, got out of his truck, opened the hood of the man’s vehicle and saw the engine on fire. Gabe ran back to his TDS vehicle and pulled out a fire extinguisher. He put out the engine fire, but in a few moments the fire kicked back up. He then ran back to his truck to get a five-gallon jug of water and poured some into the transmission, which was overheating, and then poured water over the engine.

Instead of talking about how he saved the day, Gabe said he was grateful that TDS’ safety policy is to carry two fire extinguishers and a five gallon jug of water in their vehicles.  “I was glad I had the tools available to help them.”

Gabe was humble and kept saying, “I would have done this regardless. To me it was nothing.”

Gabe has been a fire department and EMT volunteer at his local fire department for at least “20 or maybe 25 years.” And by the way, he’s now serving as the fire chief for the McMullen Valley Fire Department in Salome, Arizona.

Gabe said along with putting out the fire, he “calmed down” the couple after all the excitement. In addition, Gabe did a little work on the driver’s engine so he could make it home to Tucson that night. “He needed a little mechanical advice, which I could provide.” The next day, the family called TDS to let them know what Gabe did and express their appreciation for all his help. The family told TDS their parents had been waving their hands seeking help for about 10 minutes before Gabe stopped.

Gabe has worked as a TDS field service technician for 17 years. He said he really “appreciates” that TDS allows him the time to go on medical and fire calls. “TDS has allowed me to volunteer with the fire department,” he said. “It’s a good deal for me.”