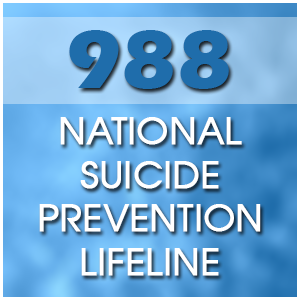 A new three-digit number—988—that will connect people to the existing National Suicide Prevention Lifeline will be in effect starting July 16, 2022.

People can call, text or chat using 988 if they are having thoughts of suicide, mental health or substance use crises, or any other kind of emotional distress. People can also dial 988 if they are worried about a loved one who may need crisis support.

In 2020, Congress designated the new 988 dialing code to operate through the existing National Suicide Prevention Lifeline’s (1-800-273-8255) network of over 200 locally operated and funded crisis centers across the country.

The Centers for Disease Control and Prevention (CDC) notes that suicide is a leading cause of death in the U.S., with nearly 46,000 deaths in 2020—or about one death every 11 minutes. The number of people who think about or attempt suicide is even higher. An estimated 12.2 million American adults seriously thought about suicide in 2020, 3.2 million planned a suicide attempt, and 1.2 million attempted suicide.

The National Suicide Prevention Lifeline number, 800-273-8255, began in 2005. The 10-digit number has served as an invaluable resource, helping thousands of people overcome suicidal crisis or mental health-related distress every day. With the transition to 988, these life-saving services will be even easier to reach.

In preparation for the transition of the Lifeline number to 988, the federal government and partners from across many telephone providers, including TDS, worked together to put the systems in place. TDS’ Number Management team was required to build the infrastructure to implement 988 in all our networks. The coordination of carrying out this massive job on the TDS telephone system took more than 500 hours of backend work.

The National Suicide Prevention Lifeline is funded by the Substance Abuse and Mental Health Services Administration (SAMHSA) and is administered by Vibrant Emotional Health.

The National Action Alliance for Suicide Prevention worked to developed messaging for the new 988-number and best practices. They also tailored 988-related messages for specific age groups. Lifeline crisis counselors are an essential element of our crisis care system to save lives.

The 1-800 National Suicide Prevention Lifeline number will remain in effect alongside 988. More than 2.1 million callers dialed 800-273-8255 in 2020, but the new easier-to-remember number is expected to mean increased call volume to the Lifeline. Implementing the new 988 number has required a need to expand call center capacity, boosting crisis response, and spreading the word about the number.

All suicide attempts should be taken seriously. Suicide attempt survivors are often seriously injured, are likely to have depression and/or another mental health disorder and are at an increased risk for suicide.

Suicidal behavior is a serious and complex public health issue that takes an enormous toll on communities in both economical and human costs.