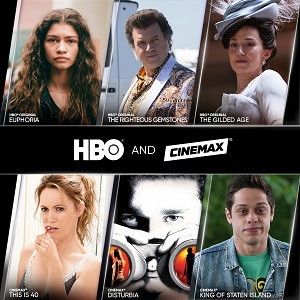 Great news, TDS TV and TDS TV+ customers—you’re getting a free preview of HBO® and Cinemax®! It starts March 10 and goes through March 14, which means you get five days to be entertained by must see new originals and the most recent hit movies on 15 channels.

On TDS TV you get seven different HBO channels plus eight Cinemax channels all day, every day so there’s always something great on whenever you grab your remote. Here are seven things you should watch during the preview:

Once you’re a subscriber with TDS, you’ll also get access to the HBO Max app and Cinemax Go. Just download the app on compatible devices (including your TDS TV+ set-top box) and authenticate using your TDS credentials and you’re set! You’ll be able to stream in addition to watching everything in your channel lineup.

So what are you waiting for? Be sure to call or go online to order before the free preview ends so you can keep watching at home and on the go. Give us a call 1-888-225-5837 or visit our website.

Channels not showing up? Try restarting your set-top box (by unplugging the power) and that should do the trick.