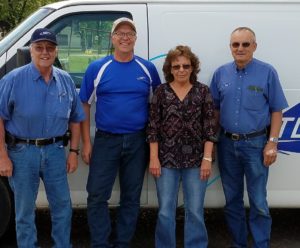 170 years of combined service at TDS

Central State Telephone Company has a long history with TDS, being the first company LeRoy T. Carlson bought back in 1967. Over the past 50 years, employees have come and gone, but four employees in Vesper, Wisconsin have worked for TDS for a combined 170 years. Harry D., Gary G., Mike G., and Rose M. share how technology has changed throughout the years and offer advice to other employees. All of us at TDS congratulate them on this accomplishment!

1978 and 1979 were big years for Harry. He got married, witnessed the birth of his oldest son, purchased a 1977 Chevy Camaro, and joined Central State Almost 40 years later, all of these remain a part of his life.

Harry started at Central State as a lineman. He was outside operating construction equipment or climbing utility poles, rain or shine. Back then, his focus was on converting customers to private lines from party lines and dial tone. Technology has been the biggest change for Harry, as now the focus is mostly on bandwidth.

“I wake up with a smile on my face every day. The job is challenging, but I’ve always liked fixing things. I get a sense of accomplishment when I do my job well,” said Harry.

Harry’s plan is to retire in five years to give his family, including his two granddaughters, his full attention. Until then, he plans on continuing to do his job to the best of his ability and always make things better for the next person.

”Always have an open mind,” said Harry. “In doing so, you will discover something new every day.”

Gary has worked in numerous positions at Central State, beginning as a lineman in 1970. He worked in Installation and Repair, did cable splicing, and now works as a CST network specialist. Gary saw the biggest change in the company when it implemented computers, making his work far more efficient.

When asked what keeps him coming back to work each day, Gary said, “Helpful management and fellow employees make it a pleasure to be at work.”

Gary isn’t thinking about retirement at this time, but when he does he plans on spending time with friends and family and traveling on his Harley. He says the key to success is to do your best and ask a lot of questions.

Mike started at TDS in 1969. He remembers moving a pole line on a road project as his first job. He thinks the biggest change within the company was getting a local area network (LAN) and personal computers.

At the time of this interview, Mike had been hard at work repairing lines after some recent storms. That’s exactly what keeps him coming back. “Just like today, I like to see customers have good service, even during or after storms,” said Mike.

After retirement, Mike hopes to stay just as busy as he is now, but at a different pace.

Mike’s advice about being successful at work also transfers to everyday life. “Be accountable to yourself and others, respect others, and strive for excellence,” he said.

Rose was hired as a plant field service administrator in 1979. Rose took trouble calls and then dispatched Installation and Repair to get customers’ phone lines repaired. This was still when the company used party lines, although it was in the process of getting private lines.

Technology has been the biggest change for Rose. She remembers how the record-keeping process has changed from pen and paper, to phone, and now to computers. Technology is ever-changing, so she continues to learn.

Rose enjoys her job because each day offers challenges that teach her something new, leaving her with a sense of accomplishment. She finds value in trying to do what she can to make the next person’s job easier. Her advice to newbies is to keep an open mind, remember that the customer is always right, and work together as a team.

When retirement comes in a year or so, Rose plans to spend more time on the lake with her grandchildren Muskie fishing.

Thanks to Harry, Gary, Mike, and Rose for all their hard work and dedication at TDS!