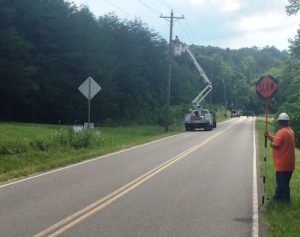 MADISON, Wis. (June 15, 2017) – Construction is under way to expand and improve broadband to more than 3,600 locations in eastern Tennessee. TDS Telecom (TDS®) began work in March in the Tellico Telephone Company coverage area. Construction is expected to be complete by year-end 2018.

The Federal Communications Commission (FCC) allocated an average of $7.1 million each year to reach residents in some of the hardest to serve areas in Tennessee. The funding will also be used to maintain a voice and broadband network as well as building out to these locations. The FCC’s Alternative Connect America Cost Model (A-CAM) will provide funding to more than 3,600 locations in eastern Tennessee with hundreds of additional customers receiving faster service from the network upgrade work.

Tennessee residents can visit the TDS website to find out how this federal program may impact their location.

Depending on location, most TDS customers in eligible rural areas will receive guaranteed broadband speeds of 25Mbps download and 3 Mbps upload (25/3). Under the agreement with the FCC, the remaining customers will receive broadband service at lower speeds of 10/1 and 4/1Mbps.

“We are proud to be part of this massive modernization project with the FCC,” said Bruce Mottern, manager – State Government Affairs at TDS. “We are eager to begin work to build faster connections to more than 16,000 locations in Tennessee over the next 10 years.”

TDS has been doing business in Tennessee since 1975 and owns four telephone companies in the state covering approximately 2,500 square miles. TDS employs about 200 people in Tennessee.

TDS TV customers: ABC Video On Demand is now available!
Take the guesswork out of your wireless internet with new Premium Wi-Fi