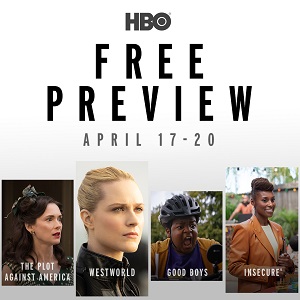 We’re all at home so it’s the perfect time to check out those HBO or Cinemax shows and movies that you’ve been waiting to see on TDS TV. Why? Because it’s a FREE HBO and CINEMAX PREVIEW WEEKEND (woohoo!). It all starts this Friday, April 17 at 6 a.m. and it ends on Monday, April 20 at 6 a.m.

This preview features an array of new shows and movies—including premiers of new shows PLUS you get to watch everything available in the HBO and Cinemax video on demand libraries.

Westworld. Season three of this super popular (and highly reviewed) series is in high gear so here’s your chance to catch up! The show pushes the boundaries and explores questions about the nature of our reality, free will, and what makes us human.

The Plot Against America. Based on the Philip Roth novel of the same name, this series follows a working-class Jewish family in New Jersey watching the political rise of aviator-hero and xenophobic populist Charles Lindbergh.

My Brilliant Friend. Season 2 of this highly rated show continues the stories from the bestselling novels by Elena Ferrante.

Insecure. Season 4 is now airing! Issa Rae stars as Issa Dee, a woman struggling to navigate the tricky professional and personal terrain of LA with her best friend Molly. New episode on Sunday!

Strike Back. Cinemax. This well-reviewed series continues! Tune in to catch the latest adventures of Section 20, a secretive branch of the British Defense Intelligence service.

Also, don’t miss the HBO docu-series McMillion$ about the con that allowed one man to rig the results of McDonald’s popular Monopoly game for a decade.

On Cinemax on demand, now’s your chance to watch Warrior, Banshee, and Outcast, just to name a few. On HBO on demand you’ll find The Outsider (based on the Stephen King novel), Avenue 5, Curb Your Enthusiasm and lots more.

To watch, go to your On Demand library on TDS TV.

There’s little time and plenty see, so kick back and enjoy some premium television and film. And, when the weekend is over, keep the experience going by adding it to your TDS TV package. Give us a call at 1-888-225-5837 or go online to order!

P.S. If your free preview doesn’t show up right away, just reset your set-top box. To power cycle your box, press and hold the power button for 8-10 seconds.