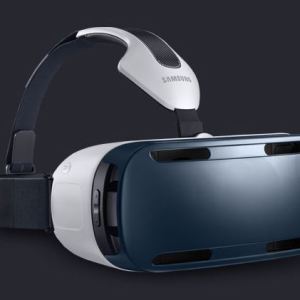 Samsung jumps head first into VR market
This week the company released Gear VR—their first leap into the virtual reality headgear market. Retailing at $199 at AT&T and Samsung, there are 17 apps available that work with it (even a couple from Oculus – the unofficial industry-leader in VR). For now, you’ll need a Galaxy Note 4 to power Gear VR, but the release puts Samsung ahead of even Oculus itself with a consumer VR product.

Google investing in Cardboard VR
A few months ago I told you about Google’s Cardboard VR goggles—their foldable cardboard headset with Velcro straps, magnets and some plastic lenses. It seemed like a throw-away toy for their conference, but it was good enough that Google is officially investing in the project. This week they created a Cardboard app section in the Play Store that features compatible apps. Google’s also rolling out a software development kit and releasing specs for tools for makers of the headset, whether it be businesses or individuals who are feeling crafty (note: if you want to buy one, check out I Am Cardboard or Unofficial Cardboard). The Samsung ones might be awesome, but you can’t beat the price for Cardboard (even if you don’t DIY some).

Your shaky camera footage is as good as a fingerprint
Researchers have discovered that wearable cameras record more than images – they also record the unique way the photographer moves. For the experiment they gave 34 people GoPro cameras to wear on baseball hats and then put the camera footage through an algorithm that looked for “motion signatures.” Ninety percent of the time, the researchers were able to identify the original photographer just from that signature (and using only 12 seconds of video). The lead researcher was quoted saying, “People who upload videos to the web may not be anonymous as they think they are.” But, it also means video footage can probably be authenticated which could be very handy in criminal cases.

Artificial skin just got more real
It might not look lifelike, but it can feel pressure, heat and dampness which makes act pretty darn real. Even better, it’s stretchy, like real skin. It’s made from a transparent silicone material called PDMS (or polydimethylsiloxane – yeah, I’ll stick with the acronym) with “silicon nanoribbons” running throughout. These ribbons are sensors that when stretched, compressed, or exposed to heat or moisture get feedback and so can “feel.” Although other artificial skins have been developed in the past, this is certainly the smartest to date. Now the challenge will be figuring out how to connect this skin to the brain to make prosthetics better substitutes for the real thing. Popular Science has more details (and the photos showing the hand with the diapers are admittedly weird :-)).

Amazon launches 4K streaming for Prime
If there’s a 4K TV in your holiday plans, perhaps it might be worth considering getting Amazon Prime. Netflix did it first, but now Amazon is following with 4K streaming options for members of their $99 yearly subscription service. As you might expect, the selection is limited, but there are TV hits like BBC’s Orphan Black, and a few shows I’ve never heard of (Alpha House, Transparent, and Gortimer Gibbon’s Life on Normal Street) but more are coming, including some new show pilots. For movies, there are 16 you can choose from including newer films such as American Hustle and The Monuments Men (plus some that would likely look awesome in 4K like Crouching Tiger Hidden Dragon and Godzilla). DailyTech has a full list of what’s available

YouTube on AppleTV gets new look, better features
If YouTube’s interface on Apple TV annoyed you, you’re in luck (and you weren’t alone in being annoyed). This week YouTube completely updated the experience on Apple TV with a whole new look, new content, better search, and more. As an Apple TV owner, I can tell you the changes were long overdue but no one is excited about the ads now appearing with videos. Oh well, having ads is also why the content offerings are so expanded, so you’ve got to take the bad with the good. Here’s a lovely promo video that gives you a glimpse at the interface, if you’re curious:

And speaking of Apple
Mashable has a list of predictions about what the company will be releasing in 2015. They’re betting on a 12.9-inch iPad, focus on their partnership with IBM (see below), maybe some iPhone 6s and 6s Plus models, a clearer music strategy, and more for HomeKit details.

Minecraft finally comes to Windows phones
It’s about time that Microsoft brought its new toy to its own phones. Mojang’s Minecraft is now available for Windows phones, two months after Microsoft bought the company. It costs the same as it done for Android and iOS—$6.99.

IBM and Apple unveil mobile app collaborations for business
You might not be super excited about this, but who you work for might be (and it was big news in the tech press so I think it’s worth mentioning). This week the unlikely couple unveiled 10 iOS apps designed for businesses that work with IBM’s analytics and cloud services. This collaboration could help Apple get fingers more deeply into the business world, and could give IBM the benefits of Apple’s user interface design (and paired with a 12.9″ iPad [see the Mashable Apple rumors above]? It could be just the ticket to woo businesses).

Iowa’s launching a digital driver’s license mobile app
In what might be first for the nation, Iowa motorists will soon be able to ditch their plastic license cards in favor of an app. The Iowa Department of Transportation is planning on offering g a mobile app in 2015 so motorists can use their phones to show I.D. during routine traffic stops and at Iowa airports. Since I’m more likely to remember my phone than my wallet, I could certainly get behind this idea! The Des Moines Register, (where I got the image) has more info if you’re curious.