It’s May, which means network shows are wrapping up. Make sure you check the schedule so you don’t miss your favorites. For the latest movies, go to TDS TV on Demand, where a couple of the best films of 2014, “American Sniper” and “Still Alice,” are coming soon. 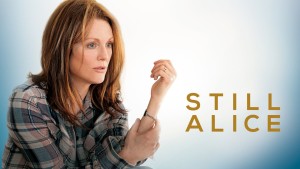 Still Alice
Julianne Moore snagged an Oscar for her stellar performance as a professor suffering from early-onset Alzheimer’s. The movie is tragic, yet gentle and moving. Moore is devastating as a woman seeing the world disappear before her eyes. Available May 12.

Seventh Son
Hokey fantasy tale with witches, dragons, magic and swordplay. It’s nothing special, but if you have a soft spot for this kind of thing, you’ll enjoy. Available May 12.

5 Flights Up
A warm and funny comedy staring Morgan Freeman and Diane Keaton as a married couple who put their long time home – a New York apartment – up for sale. Available now.

American Sniper
Award-winning film from director Clint Eastwood about real-life Navy SEAL Chris Kyle. It is a haunting and vivid tale anchored by Bradley Cooper’s first-rate performance in the lead. Available May 19.

Strange Magic
Looking for something to occupy the kiddies for a while? Here you go. This animated musical, filled with goblins, elves and fairies, is strictly for the little ones. Available May 19.

Maggie
Arnold Schwarzenegger stars as a father who’s daughter (Abigail Breslin) is slowly turning into a zombie. It’s a unique take on a crowded genre, relying more on drama than action. Available now.

Late Night With David Letterman
We probably use ‘end of an era’ too often, but sometimes it just fits. For more than 30 years, David Letterman has loomed large over late night television. With his retirement close at hand, a host of stars will be paying him one last visit. Oprah Winfrey, Bill Clinton, Howard Stern, Don Rickles, Julia Roberts, Adam Sandler and George Clooney are scheduled to appear. Expect many other surprises. Dave’s final show is set for Wednesday, May 20, on CBS.

American Idol
Find out who goes home as the next American Idol. The show may be skewing old, but this year’s competition has been first-rate. Wednesday, May 13, Fox.

Scandal
Can Olivia take down her dear old dad? Creator Shonda Rhimes isn’t afraid of piling up the bodies (see “Grey’s Anatomy”), so sit back and pray for your favorites. Thursday, May 14, ABC.

Saturday Night Live
Season 40 concludes with Louis C.K. and Rhianna. Not a bad way to wrap things up. Saturday, May 16, NBC.

Mad Men
It’s time to drop the curtain on one of the most acclaimed television shows of the past decade. Make yourself a martini and sit back and enjoy one last stroll down advertising lane with Don Draper and company. Sunday, May 17, AMC.

2015 Billboard Music Awards
Chrissy Teigen and Ludacris co-host this year’s show, which will include performances from One Direction, Van Halen, Mariah Carey, Faith Hill, Britney Spears, Iggy Azalea and many others. Taylor Swift will also debut her new video. Sunday, May 17, ABC.

The cancellations (and renewals) are coming fast and furious for the 2015-16 season. Here’s some of the higher profile comings and goings.

“Bones” will be back for it’s 11th season on Fox. The network wanted the solid performing crime procedural back, but contracts with the primary leads were expiring, putting the return in question.

“The Mindy Project” moves from Fox to Hulu with a two season order.

The venerable “Simpsons” will return for two more seasons – its 27th and 28th.

Rookie shows getting a second season include “iZombie,” “Agent Carter” and “A.D. The Bible Continues.”

Some of the more prominent shows to get the ax include “The Following,” “Hart of Dixie” and “Phineas and Ferb.”

CBS is officially bringing “Supergirl” to the small screen. Melissa Benoist, of “Glee” fame, will play the title character.

Fox’s fall schedule will include DC Comics’ “Lucifer,” as well as a series based upon the Tom Cruise film “Minority Report.”

Rob Lowe is back in “The Grinder,” a comedy from Fox.”

CW will continue to mine the comic book world with “Legends of Tomorrow,” a spin off of the “Arrow/Flash” world.